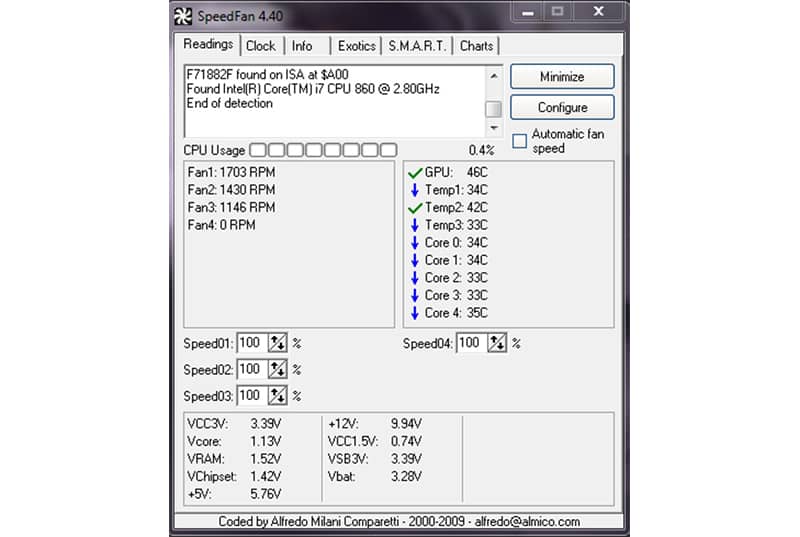 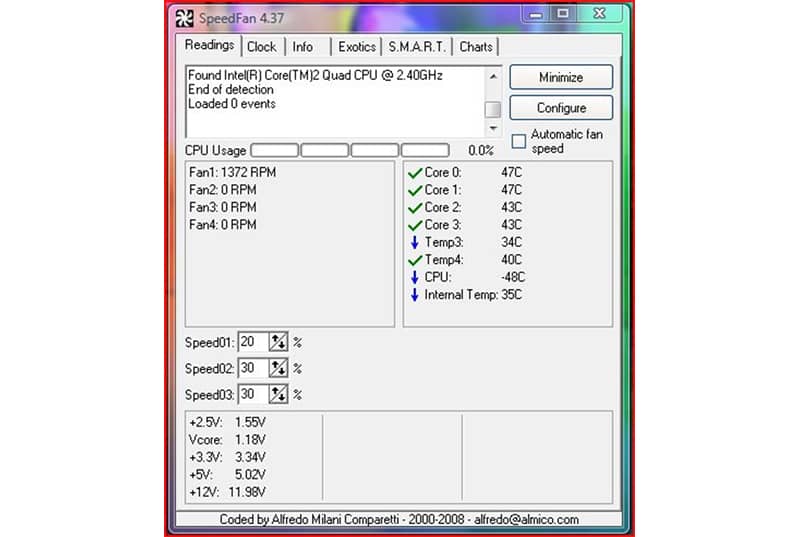 SpeedFan is software that monitors fan speeds, voltages, and temperatures in PCs and hardware monitor clips. It is also capable of even accessing the S.M.A.R.T info and manages to show hardware disk temperatures. Recently, the developers at SpeedFan have come with 4.52 on Jun 29, 2016 for the users of Windows (All Versions). Due to this update, the reviews of this program seem to be improving. You should download the latest version of SpeedFan for free and see how it can make the job easier.

Furthermore, SpeedFan has the ability to support SCSI disks too.it also changes the FSB on some hardware as well. Additionally, it has access to digital temperature sensors. Not only this but SpeedFan can also change the fan speeds accordingly and thus lets you reduce the noise.

In this latest version of SpeedFan, there are a lot of new changes that have made a major improvement in the application. Firstly, almost all the bugs and issues are eliminated from the program to let the user work easily without any unneeded hassle. To begin with, the full support for IPMI is added. Even it supports IT IT8771E as well. Other supports like Intel Sunrise Point SMBus, STMicro STTS, Atom E3800 and more such supports are added to SpeedFan.

Additionally, the user can choose to enable SMBus on Intel 6 Series / C20x. much-needed fixes like SCSI-PASS-THROUGH now can be accessed on all the systems. Also, Nuvoton NCT6971D and NCT6792D sixth fan readings are also completely fixed. Last but not the least, German translation for CPU Usage is fixed as well.

SpeedFan is a utility tool that is used to monitor the PC hardware. It is an easy-to-use software that not only monitors the PC’s hardware but also checks the fan speed and hardware temperature settings. It does not carry a steep learning curve so it is suitable for beginners as well. This software seems to be used for troubleshooting issues on your Windows PC as well. You will end up getting used to the application after  using it a couple of times. Indicating, it has a user-friendly interface.

Moreover, this program lets you monitor the health and performance of the PC without making you pay a penny. That said, it's a great tool to keep your device running at its peak. Ultimately leading to a longer lifespan of your PC. However, the functionality of SpeedFan is pretty basic but it gets the job done in the right way.

The following are the perks of using this software:

The disadvantages of this software are mentioned below:

In conclusion, it is safe to say that SpeedFan keeps your PC in an excellent condition. It is a good program that can monitor the hardware, temperature sensors, voltages, and fan speed of your PC. The user can also choose to let the app access S.M.A.R.T info and display the status of different harddisk elements. Not only this but SpeedFan also supports the SCSI disks. Additionally, it can conveniently change the FSB on hardware as well. Sinec the fan speed of your PC is controlled by this program, the reduction in noise can be seen easily.

Furthermore, as it comes with user tutorials and guides, it helps the user to get along with the app easily and quickly. Hence, the reviews of this application is impressive enough to give it a shot. Thus you should download the SpeedFan application and increase the lifespan of your PC.